Hearst Newspapers participates in various affiliate marketing programs, which means we may get paid commissions on editorially chosen products purchased through our links to retailer sites.

The late, great humorist Douglas Adams is most famous for the science-fiction farce “The Hitchhiker’s Guide to the Galaxy,” but he also wrote several episodes of Doctor Who, a few video games, was a good enough guitarist to jam with Pink Floyd, and authored a seemingly endless stream of odd (and funny) essays musing on some of the odder joys of life, many of which were captured in a posthumous collection of his work called “The Salmon of Doubt.”

One of these stories that has stuck with me over the years is called, simply, “Tea.” In it, Adams explains a specific and elaborate ritual required to make a proper cup of tea – any deviation from which will invariably make the drink “insipid.” He also explains that Americans (such as myself) “have never had a good cup of tea. That’s why they don’t understand it.” 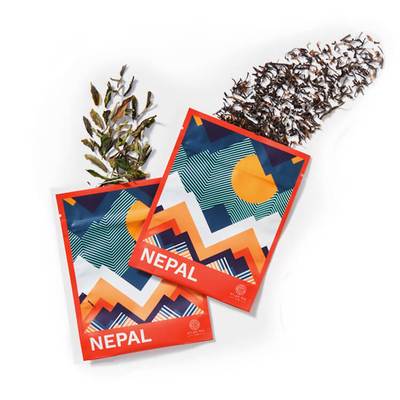 Since I was a very curious (and very easy to goad) young man, I took that as a challenge, and briefly set about trying to take tea, a drink I barely ever enjoyed, and try to make a routine out of crafting a lovingly made cup. I made sure the water was “boiling (not boiled)” when it “hit the tea leaves.” I heated the teapot before I put in the tea leaves. I even put the milk in my teacup before the tea, despite that being socially incorrect, because “social correctness has traditionally had nothing whatever to do with reason, logic or physics.” I did this for about six weeks, and then I forgot about it for years, and became a coffee drinker.

Until my Atlas tea subscription showed up, and I was reminded how much fun can go into making a steaming cup of tea and relaxing. The real fun thing about this subscription is, paradoxically, how much extra work it offers: instead of just giving me a teabags, Atlas provides sealed pouches of loose tea leaves and a collection of empty tea bags to fill up with them (this is precisely what Adams recommends in his essay). There are also precise instructions on the bag regarding how to properly steep this particular tea, including steep time and a recommended water temperature. If you want to take your tea drinking seriously, Atlas will help you.

Of course, if you want to just shovel some loose leaves in a bag and dump hot water on it, you can do that too (nobody’s going to arrest you or anything), but the point is Atlas gives you all the tools necessary to take your tea drinking as seriously as you want.

Of course, since I’m more of a coffee drinker, I wasn’t entirely sure if the tea was any good, so I recruited our Head of Business Development Nyasha Bass (we drink a lot of stuff together) to get her take.

“I drink a lot of tea,” she said, explaining her bona fides. “I have two cups every morning, and then another cup before bed.”

“I usually drink whiskey before bed,” I said.

“Oh, well, I’m leaving alcohol out of this conversation,” she replied with a laugh.

“This is good tea, it’s how I like it,” she said. “It’s a good gift, I think. If you get it for someone, they’ll think of you every time they drink it.”

I have to say I agree. The tea, which came from an all woman team in the Nilgiri mountains of India, didn’t have a particularly strong flavor, but it did have a complex one. The bag promised tasting note of “spring greens, jasmine and squash blossom,” and for once I think it actually delivered? I’ve never eaten a squash blossom, but I did taste something sorta pumpkin-y, and that’s how squash tastes to me, so I’m calling it a win.

Atlas tea is $5 for one bag or $7 for two bags for your first month.