It was at the ripe age of 25 when I encountered my first matzo ball. Sitting down to lunch with a friend at a diner in my university's Manhattan neighborhood, she urged me to try her favorite appetizer, a riff on chicken soup that she promised I'd like. Minutes later a bowl of chicken soup was served and I found myself caring not that noodles weren't included. Instead, a massive dumpling shaped in a perfect sphere bobbed serenely in the broth. The matzo ball had me at hello. And despite having no sensory imprints from childhood, the pillow-soft wonder remains one of my favorite comfort foods. I'm hardly alone: Matzo ball soup continues to be a favorite at diners and delis, as well as at dinner tables around the world, both within and outside of Jewish culture.

Of course, there's a far deeper meaning to matzo ball soup's existence than its ability to quell the effects of a bad cold or day. As the sun sets on Friday, Jews around the world will begin the first Seder of Passover, and matzo balls will likely have a prominent role in the ritual meal that commemorates the Hebrews' hasty departure from slavery in Egypt more than 3,000 years ago.

Because anything leavened and fermented from wheat, barley, rye, oats, and spelt is forbidden during Passover week, matzo and its many incarnations, from desserts to dumplings, is eaten liberally at this time of year. The grain used in matzo does not ferment and is mixed and baked in fewer than 18 minutes, making it permissible for Passover.

Rabbi Matthew Cutler of Congregation Gates of Heaven in Schenectady grew up on matzo ball soup and praises the dish both because of its religious significance and for being a simple pleasure.

"On the level of comfort food, it's huge," he said. "Matzo ball soup is simple, a little playful and reminds you of your grandmother ... it's just enjoyable."

The foundation for matzo balls is matzo meal: matzo flatbread that has been pulverized into a flour-like substance. It can be made from scratch by grinding the cracker-like squares of matzo in a food processor, but it's easier to stock up on canisters of the meal, which now come in flavored and gluten-free varieties. Easier still, companies like Manischewitz and Streit's make matzo ball mix, perhaps to the chagrin of a few grandmothers.

Depending on whether they're cooked covered or uncovered, matzo balls generally fall (or rise) into two categories, floaters or sinkers; and matzo ball lovers tend to be ferociously loyal in their preference. In her famous New York Times recipe and instructional video for making matzo ball soup, cookbook author Joan Nathan says her matzo balls lie somewhere in the middle between leaden and feather lightness.

"The tension in the Cutler family revolves around making sinkers or floaters," Rabbi Cutler said, with a laugh. "I like mine to float, but I don't want to upset the apple cart, so I'm the cleaner of the table and leader of the Seder." 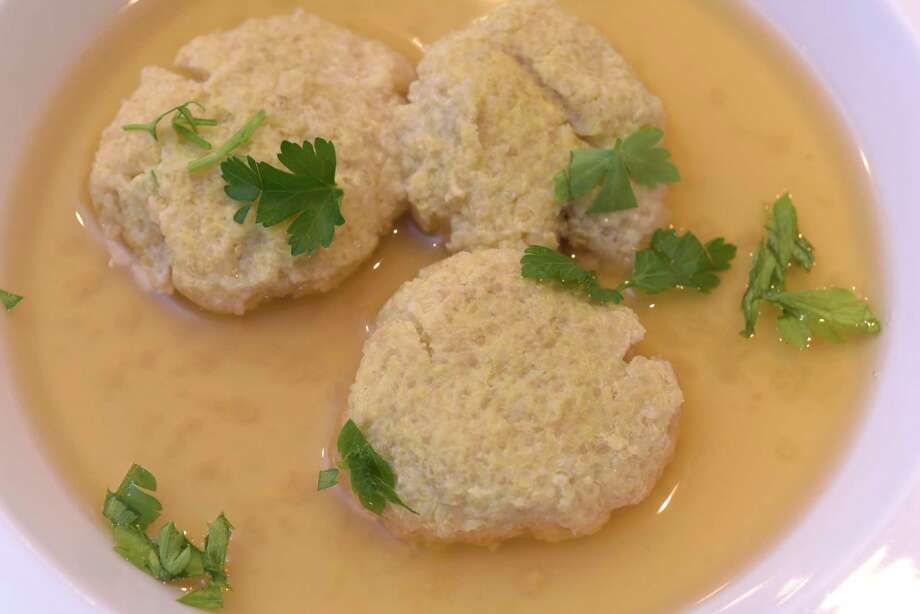 Cutler said matzo balls likely originated with Ashkenazi Jews in countries such as Germany, Austria and parts of northeastern France. Though savory soup dumplings have long been a common food staple in much of central and eastern Europe, he added that the use of matzo during Passover has a meaning like no other food element. "We're supposed to be conscious of bread and grain products during Passover, and we consecrate the use of matzo for the purpose of honoring Passover," he explained.

For this reason, Cutler says he aspires to reserve matzo ball soup consumption for this time of year, but sometimes, his love of the dumpling wins.

"I do like the idea of holding out and making matzo ball soup a special occasion for Passover," he said. "But let's put it this way, if I'm at Gershon's Deli on a Friday ... I'm known to indulge."

Stacey Morris is a Loudonville-based cookbook author, yoga instructor, and food blogger. She has been maintaining a 180-pound weight loss for eight years. Her website is staceymorris.com

Beat eggs in a medium-sized mixing bowl. Add oil, matzo meal, and salt. Blend well. Add broth or water and mix until smooth. Cover and refrigerate at least an hour or overnight.

When ready to prepare matzo balls, bring six cups of water to boil in a stockpot. While water is heating, remove matzo ball dough from the refrigerator and begin forming the balls. Moisten hands with water and with a spoon (or melon baller), scoop enough dough to form a ball about an inch in diameter. Roll between palms until the ball is firm and solid.

Drop balls into boiling water, cover with tight-fitting lid and reduce heat to a simmer. Cook for 20-30 minutes, until thoroughly cooked. Their size will more than double during the cooking process. Serve with chicken soup.

1 pot of chicken broth or soup (at least six cups) *

Fresh dill or parsley for garnishing

* If there's no time for homemade, a good quality boxed stock may be used.

Cover the bowl of 'matzo' dough and place in refrigerator overnight or for at least an hour.

When ready to prepare the balls, heat chicken stock to a boil.

Scoop chilled 'matzo' batter using a melon-baller or spoon, and roll dough between palms, forming a 1-inch in diameter ball. Drop into boiling soup, cover tightly, and reduce heat to a simmer. Cook for 20-30 minutes. Serve in bowls with stock and garnish with fresh herbs.

Besides being the perfect foundation for chicken soup, this flavorful stock can be used as a delicious base to other soups, gravies, or sauces. It's also a great substitute for plain old water when making rice. My partner's late, great father, Henry Duckman, was an adept Jewish home cook. Henry often used his recipe as a basis for the Jewish classic - chicken soup. It really is a salve for the soul.

Place chicken in a large stockpot and cover with purified water. Bring to a boil on high heat. Boil chicken for five minutes.

Fat and some gray solids will come to top of pot. Turn heat down and skim the top of pot with a small strainer or fine-slotted spoon and discard. Turn heat back up until stock starts to slowly simmer. Add all other ingredients. Simmer covered on low heat for approximately an hour.

Source: "Clean Comfort: An Adventure in Food, Courage, and Healing. Finding Peace, Balance, and My Perfect Weight," by Stacey Morris