Right around the corner from the Darien train station, an inconspicuous door in between storefronts is marked “To And From.” Reminiscent of a New York City apartment entrance, the door opens to a narrow staircase and up to a second-floor space that looks almost like someone’s living room, except for the rows of lounge chairs and work stations. The clean, cozy space is a nail salon that opened in October.

To And From does not look like a typical nail salon, and that’s because it’s not — it’s a nail salon that steers clear of many of the harsh toxins found in nail polishes and manicure/pedicure products. The “mindful nail salon” is a passion project of best friends Henri Helander, 29, and Jeanne Bloom, 28, who met in college in New York City and have lived together on and off for about 10 years. The pair lives in Bloom’s hometown of Norwalk to be close to the salon.

The business stemmed from an idea Bloom’s mother had and manifested into a mood board, which turned into a real-life salon. For the owners, who have a fashion background (Helandel was a buyer for Barney’s in New York City), a nail salon didn’t seem like a huge leap despite neither of them having salon experience. 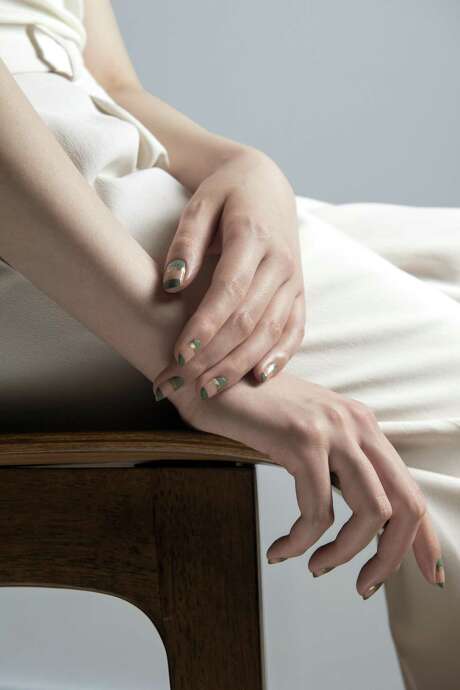 “For us, nails are fashion. They’re like an accessory,” Helandel said.

After working with a chemist and doing much research into industry standards and the potential hazards of typical nail products and procedures, Helander and Bloom decided they wanted to put a modern, healthy spin on their salon.

“We wanted to create something new for this area and an industry on the verge of very big changes,” Bloom said.

“The two of us are from a generation where we want to know what’s in our products,” Helander said. “And people in this area are shopping at Whole Foods, driving Teslas, working out — there’s a salt cave. We felt there was a really big void up here for a modern nail salon.”

They decided to work with four “healthy” nail polish brands that eliminate the main five toxins found in most nail polishes. Some of the nail polish toxins that have been getting the most attention from health advocates include: Formaldehyde (considered a carcinogen by the International Agency for Research on Cancer), triphenyl phosphate (suspected endocrine-disrupting chemical also used in a fire retardant a Duke University study found enters the human body via nail polish) and parabens, which have estrogen-like properties that are feared to be linked to breast cancer.

Per the Cosmetics Act of 1938 (the most recent one in place), the FDA does not regulate cosmetics before they hit the shelves, but it does prohibit certain ingredients. Though none of the aforementioned toxins are prohibited, and there is no negative evidence linking nail polish to health issues, there is a movement toward “cleaner,” safer nail products.

New York state assemblymember Linda B. Rosenthal, for example, is sponsoring a bill in the state’s legislature to prohibit the manufacture, distribution, sale and use of nail polish containing formaldehyde, and other chemicals. The organization Environmental Working Group has a petition to make nail polish producers stop using triphenyl phosphate.

Removing harsh chemicals from nail polish isn’t only about serious health risks, it’s also better for nail health. The FDA acknowledges that formaldehyde can cause dry, brittle nails. Helander also claims that the nontoxic nail polishes won’t cause yellowing of the nails. Despite the difference in chemical composition, the nail polish brands used at To And From don’t seem much different than regular ones. A manicure using Habit, the salon’s “cleanest” brand of nail polish, lasted almost a full week.

A classic manicure at To And From costs $25, a bit more than a traditional manicure due to the special products and sanitation equipment, but Helander said it was important for them to keep the pricing low enough that customers could still afford a weekly manicure.

Helander and Bloom don’t stop at nail polish when it comes to making their salon healthy. They also use nontoxic skin care products, and there services are done a bit differently. Manicures don’t use water because water expands the nail bed and can spread germs; pedicures are done in large bowls rather than tubs to make the sanitation process easier and more effective since drains in the traditional pedicure tubs can hide bacteria. They use medical-grade sanitation processes throughout.

The products and practices are not just beneficial to customers; the owners take great pride and care into making sure the salon is a healthy working environment for their employees. Nail technicians at To And From are spared inhalation of nail glues and harsh removers as the salon does not apply or remove acrylic nails or traditional gel manicures. Based on customer feedback, the salon does do gel manicures, but it’s a soft gel that is much easier to remove and gentler on the nails.

After learning Connecticut does not require any licensing for nail technicians, the owners decided they would require and pay for each technician to take a licensing course in New York City that teaches them the anatomy of the nail, about diseases and sanitation, the massage process and safety precautions, such as when to wear gloves and masks.

When it comes to style, Helander and Bloom also have specific ideas. The pair consults with a nail artist from New York City who has worked with celebrities and has been featured in major fashion magazines. Natalie Pavloski lent her expertise in building the salon’s menu, training technicians and doing quality control.

Pavloski and Bloom worked together to design the salon’s three sole nail art options, which consist of simple stripes and color blocking. The designs are available in different color combinations and will change seasonally. The reason for the limited design menu is consistency. Helandel said they wanted all of their nail technicians to become experts at each design. The art was based on how they see the Fairfield County customer.

“We wanted to do something that the woman up here would say, ‘I can do this with my style,’” Helander said. “It’s super sophisticated and super chic.”

The Fairfield County woman was also the inspiration for the salon’s name and the reason they offer to stay open after hours for customers who can’t make it from work before closing time.

“Our relationship has always been to and from New York City when he lived there and I was here,” Bloom said. “And then we also thought that women around here are always going to and from.”