Stephen Costanzo, co-owner and head chef at Olio in Stamford prepares polenta on an episode of Food Network's "Chopped" that aired on Dec. 7, 2017. Costanzo won the competition.

Stephen Costanzo, co-owner and head chef at Olio in Stamford prepares polenta on an episode of Food Network's "Chopped" that aired on Dec. 7, 2017. Costanzo won the competition.

The show watches chefs as they plan three rounds of dishes around surprise ingredients they get on the spot in baskets. One chef is "chopped" in each round until there is a victor. Costanzo made it to the final round against Chef Tres Barnard from New Orleans. Costanzo took home the win.

We caught up with him to find out what it was like:

Q. How did you get on the show?

A. I applied two years ago online to do "Beat Bobby Flay" and "Chopped." I went down to Food Network studios (in Manhattan) and nothing came about. A year and a half later, they called out of the blue in April and asked if I was interested. They had two dates available in May, I picked one and went down and filmed. Filming was at 6 a.m. and I finished up at about 9 p.m.

Then I had to keep my mouth shut because it takes six months to a year for the episode to air. It wasn't easy.

A. I work very well under pressure; I always have. I like to think of myself as pretty creative and pretty quick on my feet. I just thought it would be fun. I've watched the show over and over.

Q. What was in the baskets and what did you cook?

A. The episode was called "True Grits" and it was a southern theme; there were grits in every basket. All the other chefs were southern, soul food-type chefs.

The first basket was a 20-minute appetizer, but 20 minutes feels like five minutes when you have cameras in your face. It was maybe a little cliche, but I made shrimp and grits; I added chorizo, poblano peppers, mascarpone cheese and a relish out of the watermelon rinds.

I got a little daring; I didn't wanna just cut up ham and reheat it so I made ricotta gnocchi. It was a play on carbonara pasta. I diced up the ham and coated it with polenta and deep fried it, cut up green beans and made a cheese sauce and a salad of heirloom tomatoes, balsamic and arugula

We make ricotta doughnuts at the restaurant so I pulverized the blue grits and tried to make a flour and used it in my ricotta doughnut recipe. I made a blackberry sauce and boiled peanut caramel. Then I just drizzled the lemon oil over it because I kind of forgot about it.

Q. Were you nervous when you saw the ingredients?

A. Watching the show on TV I though maybe they give you more time to see what the ingredients, are but really you have about two minutes before you start cooking. It's real, nothing sugar coated.

But I was pretty comfortable with those ingredients. I've cooked every type of cuisine. I had shrimp and grits on my menu at one point here at the restaurant. Compared to some of the baskets I've seen on previous shows, I kind of lucked out. I didn't think they were that hard. 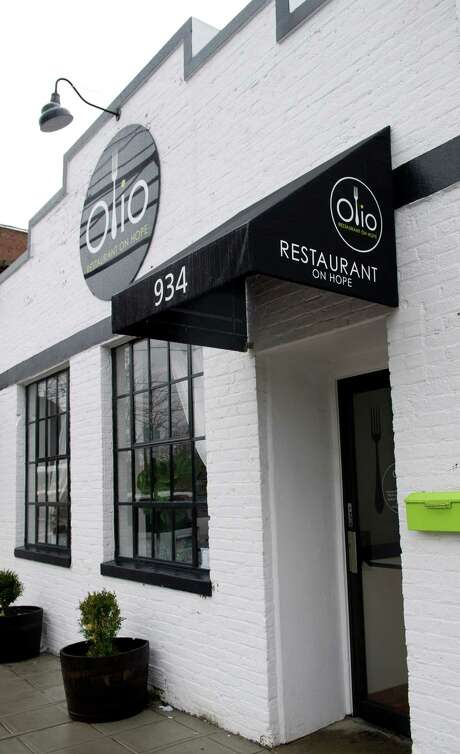 Q. What was your inspiration for the dishes?

A. Going in I had stuff in my head I've done at the restaurant. I don't think it's the time to really experiment with stuff. I applied the ingredients to what I do at the restaurant, things that I can do quick.

Q. How was it competing against another Stamford chef?

A. I didn't know until that morning when we all met at Starbucks at 6 a.m. I think we were both just happy that we were both there representing Stamford. It was good for Stamford, for the restaurant scene. It was great for me that we brought it home to Stamford. The two other chefs were from New Orleans and Tennessee.

Q. How did it feel to beat a southern chef with southern ingredients?

A. It was pretty cool. They were all all southern soul food chefs, and to beat them at their own game was kind of cool. The last round he did what I said I wasn't going do and did something he'd never done before.

Q. Have you seen a bump in business since the show aired?

A. It's been crazy. We're normally busy this time of year, but we've seen substantial increase in business. Even people in neighborhood that have lived down the street and haven't been here in the six years we've been open are coming in. It's been great.

A. We've actually thought about doing a theme night when I cook all the dishes from the show. We're playing around with the idea. It's something that may happen.

Q. Would you do another competition?

A. I know they do a "Chopped Champions" where they bring back people that have won; Id like to do that. And I'd love to do "Beat Bobby Flay."